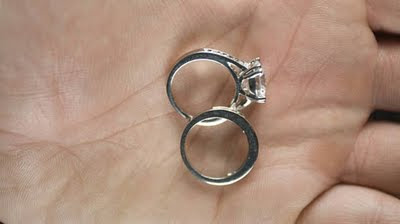 This afternoon, I officiated at a wedding. As I was recording the details afterwards in my pastoral record book, I happened to notice that this wedding was the 250th I’ve performed, since my ordination in 1983.

That’s a lot of “I dos.” It’s hard to believe I’ve been through the premarital counseling process with so many couples.

Maybe I should have offered the couple a prize. You know, something like: "Congratulations! As the one millionth customer to walk through the doors of this department store, you’re the lucky recipient of a shopping spree!" Don’t know what I’d offer a newly married couple, though... Somehow, I don’t think a coupon for a complimentary marriage counseling session would be much appreciated (and would be no bargain, anyway, since I don’t charge for marriage counseling).

I like doing weddings. They’re such joyous occasions. Every couple is so different, yet also so similar in their hopes and aspirations. As I scan down the list of names in my record book, I can still picture a great many of them. Some I haven’t seen since their wedding day (often because they were in typical young-adult transition, and moved elsewhere). Others are still right here in this congregation. For some of those couples, I’ve already had their kids in confirmation class (no weddings, yet, of any of their kids – I haven’t been here quite long enough for that).

Some of them, I’m aware, have divorced. A sad, but true reflection of national trends.

Personal anniversaries like this are great milestones. They remind me there’s much more to who I am than my cancerversary.