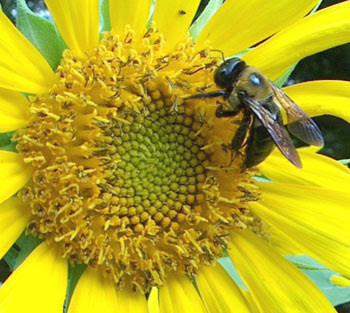 There’s a widespread news story in the past couple days about “nanobees” – a technique of cancer treatment involving nanoparticles that head right for tumor cells. Researchers at Washington University in St. Louis have armed these tiny particles with melittin, a protein that’s the active ingredient in bee venom.

It’s a colorful image: swarms of nanoparticles racing through the body, locating cancer cells and stinging them to death. The fact that these particles are armed with a chemical found in actual bee venom verges on the poetic.

Here’s Paul Schlesinger, one of the researchers, commenting on why melittin shows such promise as an anti-cancer agent:

“Melittin has been of interest to researchers because in high enough concentration it can destroy any cell it comes into contact with, making it an effective antibacterial and antifungal agent and potentially an anticancer agent. Cancer cells can adapt and develop resistance to many anticancer agents that alter gene function or target a cell’s DNA, but it’s hard for cells to find a way around the mechanism that melittin uses to kill.”

So far, the researchers have had success in killing human tumor cells that have been implanted in mice. The nanobees have done their job on the tumors, delivering the melittin without causing ill effects in the mice.

This is important because, if melittin were injected directly into the bloodstream, it would attack hemoglobin cells. Somehow, when this protein hitches a ride on a nanoparticle, it holds off on its venomous attack until the nanoparticle delivers it to a cancer cell.

Yes, there’s a lot of lab work involved in developing a treatment like this. I find it interesting, though, that the new therapy’s essential ingredient is something found in nature – in the humble honeybee.

Whatever actual treatments may emerge from this new approach, it’s comforting to think that the answer was out there in nature, all along.
Posted by Carl at 8:46 AM

I like this idea and agree with you description "poetic justice." Wouldn't it be great to just sting the cancer to death!

I am agree on your idea, it will really helpfull for stop this disease.

Cash Online Get Easy cash at your door step

Your post is so touchy..And as always you seem to capture what I feel in words that escape me. Be healthy!

Your post is so touchy..And as always you seem to capture what I feel in words that escape me. Be healthy!