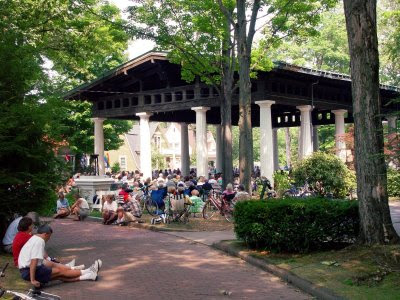 I’m serving as Chaplain at the Presbyterian House. My duties are pretty light: I preached a sermon on Sunday, offer grace at meals and will conduct a program of my choice on Thursday evening (I’ll lead a discussion on John Calvin, since his 500th birthday is the next day). For this, Claire and I get free room and board for a week, as well as a “gate pass” that gets us into most of the concerts and events that take place here. A generous offer on the part of the Presbyterian House board, for which we’re very grateful.

Chautauqua’s quite an experience: a throwback, in many ways, to the early years of the 20th Century. It’s a picturesque lakeside village filled with Victorian-gingerbread houses. Cars are pretty much banned 7 days a week; the whole place is surrounded by a fence, and – except for Sundays – you have to have a gate pass (admission ticket) to get in. Some people own homes here, and others either rent places or stay in the many hotels and guest houses. Lots of people we’ve met have been coming here for decades. 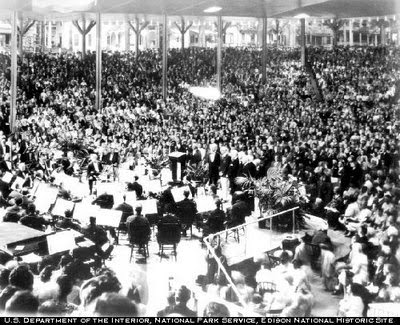 Sitting in the Auditorium on Sunday, listening to Samuel Wells, chaplain of Duke University (the preacher for the week) give an excellent sermon, I was struck by how insular Chautauqua is. Introducing Sam was Joan Brown Campbell, former director of the National Council of Churches, who’s now head of the Department of Religion here.

Chautauqua is a bastion of old-time, liberal mainline Protestantism. While most historians agree the Protestant Ascendancy in America reached its high-water mark decades ago, in the Eisenhower era, you’d never know it here in this place. Looking out at the nearly-full auditorium, listening to the spirited singing of classic hymns accompanied by a massive pipe organ, I was struck by how much the place feels like a protected island in the storm.

Out there, mainline Protestant churches are struggling against fearsome cultural tides that threaten to sweep us away. Many local churches are enmeshed in “worship wars” that pit fans of guitar-accompanied praise songs against those who love organ-accompanied hymns. We’re beset by interminable, destructive debates over sexual ethics. My own baby boomer generation seems to be the first generation of Christians ever that doesn’t understand what committed, regular financial stewardship is all about, so many churches are cutting budgets and downsizing (and were doing so even before the present recession began). Out there, these are tough days to try to pastor a mainline Protestant church.

In here, though – inside the Chautauqua bubble – it’s as though none of this were happening. Life goes on here, as it has for generations. The faces of the preachers, lecturers and musicians change, of course, but the overall program is much as it’s always been.

Bill, a friend of mine, describes it as "Disneyland for intellectuals."

A literary metaphor occurred to me, as I was sitting there that first day, that to me describes the role Chautauqua plays in the mainline church. This place is Rivendell. 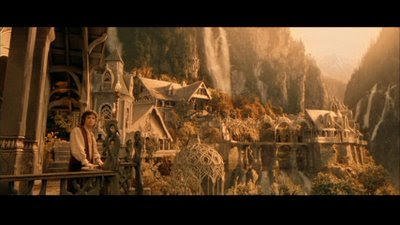 In J.R.R. Tolkien’s The Hobbit and The Lord of the Rings trilogy, Rivendell is the sheltered community of elves, whose powerful magic keeps creeping evil at bay. Much of Middle Earth is quaking in fear at the advancing armies of Saruman, and his more-powerful ally, the Dark Lord of Mordor, but in Rivendell, all is peaceful. When Frodo Baggins and his band of travelers reach Rivendell after facing all manner of perils, they know they are safe for as long as they tarry within the elves’ circle of protection.

Eventually, even the elves themselves will depart their “last homely house,” and somberly sail off in their elegantly-crafted sailboats to eternal life in the Grey Havens – which seems to function, in the Tolkien novels, as something like heaven. But, for the present, Rivendell is a haven in the storm, a place of rest, refreshment, and re-equipping for the battle.

I can use this sort of R&R in a personal sense, of course. I haven’t been thinking about cancer much, while I’m here – although a few Presbyterian House residents, knowing of my history with lymphoma, have come up to me to share their own struggles with the disease. I’ve been thinking a good deal more about how wonderful life in the mainline Protestant church would be if all our congregations were filled with members and ministers like the good folks here. There’s a real spirit of caring and openness and generosity that permeates the place. Would that we could recreate it in our own communities back home!

Looking out over the auditorium congregation, I was also struck by how much gray and white hair there is. This place is teeming with AARP members. Many of the younger folks we’ve met – twenty- and thirty-somethings with kids in tow – are here with their parents and grandparents. It’s a popular spot for family reunions. Would the younger ones choose to come on their own?

All of which raises the question.... Whither mainline Protestantism? Will this congenial crowd return to their home churches, refreshed and renewed, equipped to bear witness to the gospel in edgy, new ways? Or, will they hang around spiritual oases like this a while longer, before packing it in and sailing off to the Grey Havens one day?

I’ve got a feeling the renewal of the mainline church won’t be sparked in places like Chautauqua. As wonderful as this place feels, it’s more about the past than the future.

But even so, it feels good to rest here a little while. Even the Fellowship of the Ring had to take a breather in Rivendell.
Posted by Carl at 11:57 PM