A recent editorial in one of my favorite journals, The Christian Century, raises a pertinent question about the present healthcare-reform debate:

“The logic of putting citizens into a government-sponsored insurance pool is clear: it drastically cuts overhead, equalizes care, and meets the needs of those who can't afford or obtain coverage from for-profit insurers, who cut their costs by excluding patients with serious medical problems – precisely the people who most need the insurance and the medical care. But that logic alone will hardly slay the hardline defenders of the for-profit insurance system. The political and practical question of the moment... is whether there is any viable compromise – is there a coherent incremental step between the private system we have now and a full-fledged single-payer public plan?”

President Obama seems to think there is – which is why he’s backed away from his campaign promise to move expeditiously to a single-payer health system. Now, he’s mired in the boggy no-man’s-land between the single-payer advocates on the one hand and the insurance companies (clinging to the tattered remnants of our dysfunctional healthcare-funding system) on the other. He’s dodging rotten tomatoes being hurled from both sides.

It’s a battle of ideologies: between the free-market true-believers on the one hand – who are convinced not only that “the business of America is business,” as Calvin Coolidge famously said, but that the best marketplace regulation is no regulation – and those who believe history teaches, on the other hand, that a capitalist economy will end up eating its young if government doesn’t step in with some timely regulation.

In the same issue of The Christian Century, social ethicist Gary Dorrien makes this important observation: 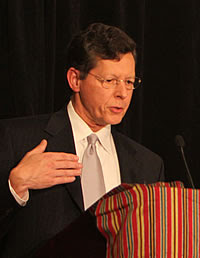 “A fair amount of time has to be spent repeating over and over that single-payer is not socialized medicine, and a public option among private competitors is even farther from it. But we are approaching the point where opponents of health-care reform will start to stress the opposite concern. Their concern is not that a government program won’t work. The real worry, for all who want to keep the present system, is that a government program will work too well.”

Are profits always good? That’s the essential question. Are they still good, even when the unfettered pursuit of profits causes pain for increasing numbers of people? How many of our neighbors must feel pain before the larger culture sits up and takes notice, demanding substantive change? How many uninsured and undertreated Americans is our system willing to throw under a speeding ambulance, before we’re willing to even consider following the lead of just about every other industrialized nation, implementing a national health-insurance system?

That’s the question I sigh and ask myself these days, anyway, as I scan the headlines.
Posted by Carl at 7:34 PM

Hi Carl, I stumbled on your blog today. I too am a pastor emerging from a wrestle with cancer. I wish I'd found your blog earlier. Mine is
here