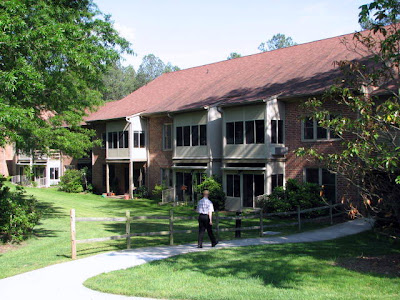 My mother’s up visiting, from Chapel Hill, North Carolina. The other day she mentioned to Claire and me that she’s considering moving back up to New Jersey. She loves living at Carol Woods, the Continuing Care Retirement Community where she’s been for the past 5 years or so – but, ever since my cousin Judith left her tenured full professorship at the University of North Carolina for a professorship at the University of Southern California, she’s missed having family around.

We'd enjoy having her up here. North Carolina's a nice place, but it's pretty far from here.

So, today, at her request, I drove her around to a couple of CCRCs in this area: Seabrook in Tinton Falls and Harrogate in Lakewood. Both are beautiful places. Both describe their residents’ experience as “like living on a cruise ship on land” (a bit of hyperbole, to be sure, but not that far off the mark). 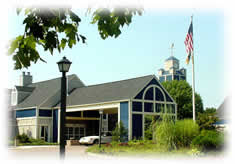 It remains to be seen whether Mom will actually make the move – there’s a lot to consider, like costs, waiting lists, and the like – but the whole experience got me to thinking. As we listened to the marketing spiels, I was reminded again of how so many members of these communities are in their high 80s, 90s, or even above. These CCRC facilities – virtually unknown 30 or 40 years ago – have flourished as American life expectancies have increased. They’re really designed for folks in the new, second stage of retirement, which can go on for years and years.

What about me? Will I make it to the point where Claire and I will be considering a place like this someday, many years down the road?

Before I had cancer, I might have thought so. Now, I’m not so sure.

It could still happen. They say more and more people with “incurable but treatable” indolent lymphomas like mine are living until some ailment other than cancer does them in. 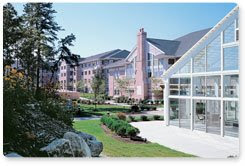 At age 51, it seems way too early to be thinking about retirement. Yet, this is the age when such thoughts do begin to drift across the surface of the mind. The good news is, with all the hopeful signs emerging from the world of lymphoma treatment, it’s not an unreasonable thought to entertain.
Posted by Carl at 2:14 AM