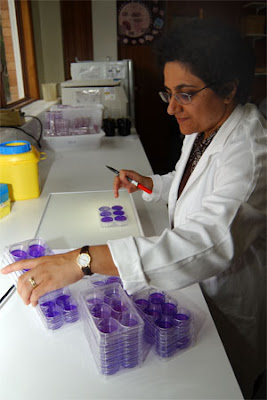 I’m on vacation. Before heading off to our Adirondacks place for some quiet times in the woods, I’m catching up on some mail, here at home.

Reading through the Spring, 2008 newsletter sent out by the good folks at the Lymphoma Research Foundation, I come upon an article about recent research developments in the treatment of indolent (follicular) lymphoma. Here are some highlights:

“Oncogenesis. Scientists are investigating oncogenesis, the molecular and cellular changes associated with cancer development, to identify precursors of follicular lymphoma disease. By identifying molecular and cellular differences among tumors, scientists hope to predict the course of disease, close in on the best choice of treatment for an individual patient and identify new therapeutic targets.

Antibodies and beyond. To add to the list of follicular lymphoma therapies, many monoclonal antibodies are being tested – including several ‘second generation’ anti-CD20 antibodies, which purportedly have advantages compared to rituximab. Antibodies with alternative targets are also being studied such as CD5, CD23, CD30, CD40 and CD80. Despite some initial failures of cancer vaccines, some researchers remain optimistic about their therapeutic potential. Researchers are pursuing additional biologic agents that may prove useful in follicular lymphoma management – bortezomib and temsirolimus among them – but many questions remain about their potential.

Transplants and toxicity. New agents and approaches are also under development to minimize the toxicity associated with stem cell transplants – notable among them, the new non-myeloablative transplantation option, which uses much lower doses of conditioning therapy to prepare patients for transplant.”

A few of these things I’m familiar with. Rituximab is, of course, the scientific name for Rituxan, the monoclonal antibody medication I received along with my chemotherapy. That drug seems to have done the trick for me (at least in fighting off the aggressive lymphoma I had, that hasn’t come back), but it’s good to know there are even more effective drugs in the research pipeline.

The “non-myeloablative transplantation option” (when you’ve said that, you’ve said a mouthful) is exactly the sort of stem-cell transplant they were recommending to me, up at Hackensack University Medical Center last September. It involves lower-dose chemotherapy as the first stage of treatment, prior to the transplant – which minimizes side effects and lowers the risk of life-threatening complications from infections. It’s nice to know I’ve been talking with doctors who are on the cutting edge of stem-cell treatment research – so that, when and if it’s time for me to go for one of those, they’ll be guided by the latest treatment protocols. This also means that, the longer I wait, the more likely it will be that the risks will have diminished even further.

So, let’s hear it for the cancer researchers! They’re making wonderful progress.
Posted by Carl at 3:04 PM

Dear Pastor,
I couldn't agree more: Bravo, researchers. It takes a very special person to slog through the paperwork and failed experiments to make incremental progress.

There are no incurable diseases, only diseases for which researchers are working toward cures.