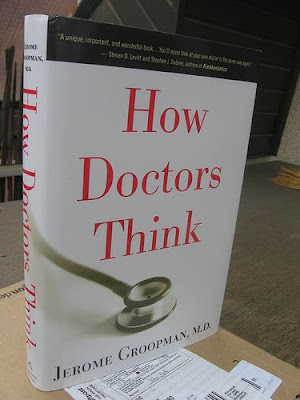 This morning, I finish reading How Doctors Think, by Jerome Groopman, M.D. I’d give this book an unequivocally positive recommen- dation. It’s one every patient should read.

That’s no exaggeration. I really mean it.

The book’s important because of the light it sheds on a mysterious chemistry: that of the doctor-patient relationship, particularly when it comes to diagnosis. As we patients lay down our magazines and make our way from the waiting-room into that medical holy of holies, the examining-room, many of us look for something magical to happen there. Doctors, clad in their priestly, lab-coat vestments, shuttle from room to room. We’re a little in awe of our doctors. They have the gift. The whole medical system is designed to maximize their precious time, so more patients can have their few brief moments in the presence of the gift of diagnosis.

The higher you climb up the ladder of medical specialists, it becomes less likely your doctors will occupy themselves with routine matters like asking medical-history questions or taking vital signs. Nurses and aides – and, in teaching hospitals, doctors-in-training – typically perform such tasks. If the system is working as it should, their careful observations will be laid out before the doctor as he or she performs the cognitive process leading to diagnosis and treatment. If the system’s not working well, the doctor’s understanding of the patient will be superficial, and mistakes become more likely. Decisions may be made in a two-dimensional way: mechanically matching up symptoms with slots on a treatment-protocol flow chart, ignoring the living, breathing, thinking complexity of the human being who’s sitting on the edge of the examining-table.

Groopman unpacks the mysterious, priestly work of diagnosis and treatment for us laypeople to understand. He probes the meaning of the diagnostic gift, and asks how it can best be utilized. He reminds us of a very old-fashioned idea: that medicine is an art as well as a science.

Groopman’s point is that a clinical consultation in a doctor’s office is an act not only of number-crunching scientific analysis, but also of communication. In the examining-room, two people come together and talk. What they say – and, often, what they don’t say – can mightily determine the outcome. 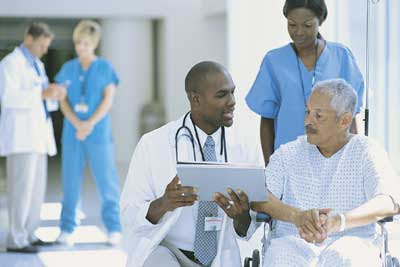 I come away from this book with a renewed appreciation for two types of physicians: the unsung, relatively underpaid family-practice doctors whose intuitive diagnostic skills are honed to a fine edge, and those specialists who possess the strength of character to buck the system’s pressures to think only in terms of numbers, not the person. It’s no wonder Groopman’s final chapter is entitled, “In Service of the Soul.”

I think back to my own experience of diagnosis. Groopman could have used it as an example in his book. I go into David Cheli’s office for an annual physical. Aware that I’m nearing 50, I mention the fact that my father nearly died of a dissecting aortic aneurysm. I know these can be hereditary, I tell the doctor. Is this something I should be checked for?

“That’s unlikely,” says Dr. Cheli. “You don’t smoke, and your blood pressure is fine.” He sends me on my way, with the usual encouragement to lose weight and exercise more.

At the next year’s annual physical, I mention an aneurysm again. I’m not reporting any symptoms relevant to such a diagnosis, but it’s been on my mind, for some reason. Thinking back to that time, I now realize that maybe, on some subconscious level, I was aware that the mid-section of my body felt somehow different. If you’d asked me directly about it, though, I would have scoffed at the suggestion. (In retrospect, I realize I was experiencing one symptom relevant to lymphoma, night sweats – but I wasn’t attuned enough to mention it to the doctor.)

What I could articulate, on a conscious level, was a vague anxiety that I could end up like my father someday – being airlifted to a major medical center for a herculean operation to replace a split-open section of my aorta with a nylon substitute. It wasn’t a rational thought – but, as it turned out, it did have a kind of truth behind it.

Who knows what went through Dr. Cheli’s mind, at that point? Here’s a patient – overweight and a bit stressed-out, but otherwise healthy – worrying for the second year in a row about a medical condition for which he doesn’t fit the profile and doesn’t have the usual symptoms.

What Dr. Cheli did was send me for an ultrasound scan of the abdomen. Did he have a reason for doing so, other than my repeated question about an aneurysm? Was he ordering that relatively inexpensive test simply to give me peace of mind, or did he intuitively suspect something else was up? I don’t know. But, I’m awfully glad he did order the ultrasound. It was in the grainy images on that screen that the bulky tumor in my abdomen was first revealed. 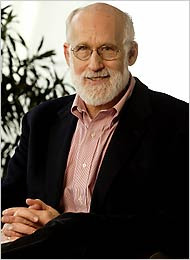 The light bulb goes on for me, this morning, as I read these words from the Epilogue to Groopman’s book, about the thoughts that may go through our minds, as patients, as we talk to the doctor: “Our notions sometimes come from knowing a friend or relative with a similar symptom, or ideas may have been sparked by looking on the Internet. Our thoughts about our unrelieved symptoms often focus on the worst-case scenario. Such self-diagnosis is a reality that neither patient nor physician should ignore. Since the doctor may not address it, you should. ‘I’m most worried that what seemed like acid reflux could be the first sign of cancer,’ one patient might say. Or another might recount to the doctor how her friend was told she had indigestion but it was actually a brewing heart attack.... A thoughtful doctor listens closely to these worries.” [Jerome Groopman, How Doctors Think (Houghton Mifflin, 2007), p. 261.]

Thanks, Dr. Cheli. Thanks for listening.
Posted by Carl at 12:57 PM

Dear Pastor,
Thanks for discussing this popular book. As a physician-survivor, I see the most important lesson of Dr. Groopman's latest book (and in my opinion, his best)is the notion of teamwork. In the setting of mutual respect and trust, physicians and patients can help each other in the shared mission: helping the patient become a Healthy Survivor, by which I mean a survivor who gets good care and who lives as fully as possible.