One notable fact shared in this video is that there’s been an “alarming” increase in incidences of lymphoma over the last 20 years. No one knows why. I suppose I’m a part of that trend (better not to be trendy about some things, I always say).

I also found it interesting how the Australian expert describes the mechanism behind follicular lymphoma as the failure of lymphocytes (white blood cells) to die. We generally look on prolonged life as a good thing. Yet, when it comes to most of the cells in our bodies, it’s certainly not. Our bodies in fact depend on regular cell death in order to stay healthy. Most of the cells in our bodies die eventually – long before we, as a larger organism, die ourselves – and are replaced by newer cells. Only our brain cells last a lifetime (at least those that are not killed off early by drug or alcohol abuse, or by disease). 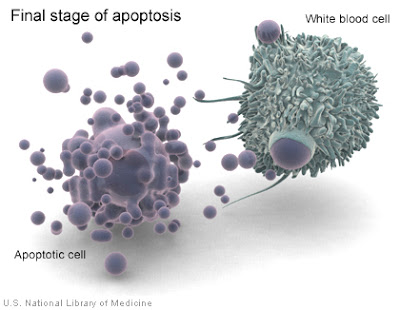 This means we’re literally, in a biological sense, not the same people we were when we were born. Little by little, the cells of our bodies have been hauled out to the biochemical scrap heap and replaced with newer models. This has happened gradually, imperceptibly, in a carefully phased and controlled process called apoptosis, that avoids the catastrophe of too many cells dying at once.

Here’s something science writer Lewis Thomas has written about that process, in his bestseller, The Lives of a Cell:

“Everything in the world dies, but we only know about it as a kind of abstraction. If you stand in a meadow, at the edge of a hillside, and look around carefully, almost everything you can catch sight of is in the process of dying, and most things will be dead long before you are. If it were not for the constant renewal and replacement going on before your eyes, the whole place would turn to stone and sand under your feet…. It is a natural marvel. All of the life of the earth dies, all of the time, in the same volume as the new life that dazzles us each morning, each spring. All we see of this is the odd stump, the fly struggling on the porch floor of the summer house in October, the fragment on the highway.”

Jonathan Swift’s classic satirical novel, Gulliver’s Travels, is a travelogue that takes in more places than simply Lilliput, the land of the little people (which is typically the only episode of the story to appear in movie versions). One of the lesser-known lands Gulliver visits, after Lilliput, is the mythical land of Balnibarbi. In this country, it sometimes happens that a person is born who lives forever. Such people are instantly recognizable, even as infants, by a red birthmark on their foreheads. The citizens of that land call these people "struldburgs." 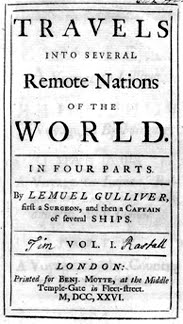 Such individuals are not considered blessed. In fact, to be born a struldburg is considered a terrible misfortune. It’s true that these people never die, but they also continue to age at a normal rate. Eventually, everyone they love dies, and then they lose their sight, their hearing and even their minds. These dried-out husks of human beings end up aimlessly wandering the countryside, in a state of never-ending misery. Theirs is, literally, a fate worse than death.

Struldburgs are like certain kinds of cancer cells, including cancerous B-lymphocytes. Such cells refuse to die, and by their continued life they threaten to bring down the larger society in which they live.

Eternal life is the prize at the end of the Christian life. Cancer teaches us it’s better to wait on that, until the right time. When some of our cells jump the gun and try to attain eternal life in the here and now, problems ensue.
Posted by Carl at 12:03 AM