Today I come across a helpful and attractive website, belonging to a group called the Cancer Recovery Foundation of America. It’s got a lot of useful information for cancer survivors. 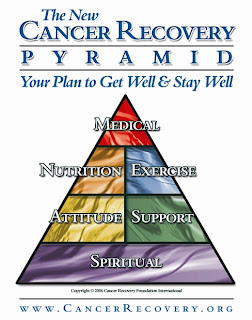 The thing that’s most intriguing to me is a rather simple teaching tool called the Cancer Recovery Pyramid. It’s modeled, I’m sure, after the nutritional pyramid used by the Federal government.

I like several things about this model. First, spirituality is foundational. It’s the broad base on which everything else rests.

Second, the next level pairs attitude and support, which are indispensable both to recovery and to each other. Keeping a positive attitude is central to cancer recovery, but it’s not everything. Those who are successful at living with cancer, in my experience, are those who also reach out and build connections with others. They know the importance of both nurturing their existing intimate relationships and establishing new ones with fellow cancer survivors.

Third, the pyramid emphasizes nutrition and exercise. If there’s any part of the pyramid that’s my personal weak point, it’s this level. I do know, though, that when I eat right and get to the gym regularly, I feel better.

Finally, medical treatment is at the top of the pyramid. This is where it should be. There are some who emphasize alternative therapies to the point where they’re neglecting, or even contravening, medical advice. These are the people who are inclined, by nature, to jump on the bandwagon of each new bit of wacky, word-of-mouth advice that comes their way. They are constantly getting their hopes up and seeing them dashed just as quickly. It’s better to think not of alternative therapies, but of complementary therapies – those pursued in coordination with the best medical advice.

At the same time, it’s worth noting that the area occupied by medical treatment is the smallest of all. As vital as medicine is (symbolized by its position at the top of the pyramid), it’s a paltry response indeed if the other areas are not also in place, forming a solid foundation. Patients who walk into the doctor’s office spiritually grounded, supported by healthy self-esteem and by their families and communities, and taking good care of their bodies are best-equipped to live with cancer. 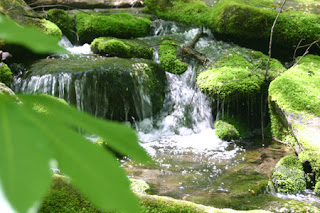 These are some things I see in the Cancer Recovery Pyramid. Whether all these observations were intended by the pyramid’s creators to be there, I don’t know. But that’s what it says to me.

Now, if I could only do better with that diet and exercise thing...
Posted by Carl at 1:03 PM