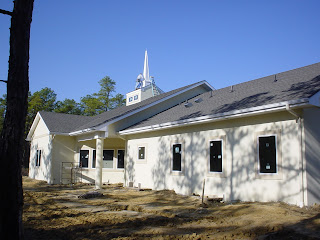 This morning I’ve got a guest-preaching gig at the Morning Star Presbyterian Church of Bayville, New Jersey. This is a first for me. Never once, in a quarter-century of ministry, has anybody asked for a rerun of one of my sermons.

The sermon is one I preached for Morning Star ten years ago, at their chartering service, when they were formally established as a congregation. A few months ago, I was surprised and pleased to learn from my friend, Myrlene, their pastor, that my sermon of ten years ago influenced the architecture of their new building (into which they’ve recently moved). That’s why they wanted me to repeat it – or, at least to preach on the same scripture passage.

I’ve had sermons result in all sorts of things, over the years: action, discussion, questions, jeers, slumber. Usually, the effects of sermons are pretty ephemeral. Never before have I had a sermon result in architecture.

The new Morning Star Church has a cupola, which sheds borrowed light into their worship space. Their roof is not literally open to the elements, of course, but symbolically it is. Several of their members insisted on this, I’m told. 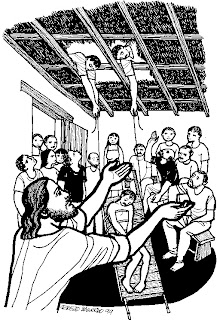 The sermon is on Mark 2:1-12, the story of one of Jesus’ healings. This is the story that includes the rather colorful detail of a paralyzed man on a stretcher being lowered through a hole in the roof – this, in order to get around the crowds who are pressing so tightly around the house that no one can get in.

What I said to the people of Morning Star ten years ago – and repeat to them today – is that they need to keep a hole in the roof, so hurting people may continue to find a way in. Some long-established churches have a way of forgetting how to do that: focusing more on serving the needs of their members than welcoming those from outside their walls. New churches like Morning Star tend to be pretty good at this, but the more years of history a church accrues, the harder it becomes to maintain a missional outlook. 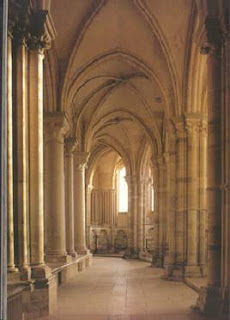 Today is a day I’ll always remember. One of the frustrations of ministry – particularly the wordsmithery that is preaching – is that tangible results are so hard to identify. Plenty of preachers have retired after many decades in the pulpit, wondering if they’ve made much of a difference. However long I remain healthy and am able to continue in ministry, I’ll always be able to recall that, in south-central New Jersey, there’s a church that keeps a symbolic hole in its roof, because of something I said to them back in 1997.

During the service, reminders of cancer are all around. Myrlene’s late husband, Ed – a minister who co-founded the church along with her – died several years ago of brain cancer. Candy, a church member who’s leading the intercessory prayers, asks for prayers for herself, as she’s recovering from breast-cancer surgery. Another woman asks for prayers, remembering the loss of several family members to multiple myeloma. A man tells how he's preparing for kidney surgery in a few weeks – again, a cancer diagnosis. 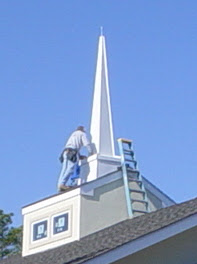 Most churches, in fact, are filled with people whom cancer has touched – either directly, or indirectly through family members and close friends. They are like the crowds pressed around Jesus, in that little house in Capernaum.

Let us always remember to make room for more!
Posted by Carl at 12:23 PM

Carl, What a great story!! How wonderful that you were so honored to be asked to do this - perhaps our church would benefit from this sermon in it's entirety. Thanks for continuing to blog. Charlene & Harvey

Well, actually I preached "A Hole in the Roof" first at Point Pleasant, back in July of 1996 (or, at least a similar version of it). I don't repeat sermons in the same church - I've never felt that I could present a sermon that was a "rerun" with integrity. Morning Star was a special case, because they specifically asked for it.

I don't know, though... on second thought, some people LIKE reruns. Maybe this is one I could revisit sometime?

Neat story, and excellent sermon topic. Very creative. I bet I'd enjoy your sermons as much as I enjoy your blog. But that's a little far for me to drive on Sunday's...