Today, I've got a lot to think about, after yesterday's consultation with Dr. Michele Donato, a stem-cell transplant specialist at Hackensack University Medical Center. Let me recall a few highlights...

I drive the one-and-a-half-hours to Hackensack on my own (Claire has to work). By now, I've pretty much nailed the new-patient routine: meticulously fill out all the forms they've sent you ahead of time; schlep along with you whatever test and scan results you can lay your hands on (both narrative reports and films/CDs); don't forget your insurance card and checkbook for the co-pay. Oh, and be sure to bring a good book to read – waiting-room times are directly proportional to the reputation of the medical center.

No surprises, here, on any of these points. When an aide finally calls my name, inviting me to come see Dr. Donato, she ushers me not into an examining room, but into the doctor's office. I sit across the desk from the doctor, as she asks me questions about things she’s read in my file. Off to one side are a couple other HUMC staff members: Brenda, a nurse who's a "transplant case manager"; and Angelica, another nurse who's a transplant-case-manager-in-training.

Some people say the day you realize you're getting old is the day you meet your new doctor who's younger than you. Well, if that's the case, then today I've entered serious geezerhood. It's not that Dr. Donato is a little younger than me. She's a lot younger than me. That must mean she knows her stuff. More power to her.

The doctor's upbeat about my prospects, remarking on (1) how young I am and (2) how healthy I am. This feels refreshing, because – after getting beaten up by cancer for the past couple of years – I haven't exactly been feeling either young or healthy. But – I’ve got to remember – I’m deep in lymphomaworld now. In the real world, I can't qualify for life insurance. In lymphomaworld, I am young and healthy. (I suppose a goodly portion of Dr. Donato’s patients are both elderly and more road-weary than I.)

She says I appear to be a good candidate for a stem-cell transplant. My ticket for admission is the fact that I've relapsed – and quickly, at that. The fact that my indolent lymphoma would recur at all is not surprising. It's the speed with which it's returned that gives her cause for concern.

Today's meeting is just a consultation. The real decision will be made by HUMC's Tumor Board: a committee composed of doctors from the lymphoma department, the stem-cell transplant department and the pathology department. They'll consider my case a week from Wednesday (I'm supposed to call Brenda that afternoon, and find out what went down).

Dr. Donato explains that a stem-cell transplant – as grueling as it is to undergo – is the treatment offering the highest success rate against indolent lymphoma. There's a 65% chance it would put me into long-term remission (with "long-term" defined as 5 years or more). That’s two out of three: pretty good odds, in lymphomaworld.

She says I'm not ready for a transplant just yet: ironically, because my cancer is back. The kind of transplant I need requires that I already be in remission. So, I’d first need to go back to Dr. Lerner and have him whack the cancer moles back into their holes. As part of their report, the Tumor Board will recommend some strategies for doing that.

The sort of transplant Dr. Donato is proposing is known as a "mini-transplant." (For a brief video on mini-transplants, click HERE.) It differs from some other transplant methods in that it's meant not so much to turn back active disease, as to prevent disease from recurring. Other transplants differ from a mini-transplant because they involve massive doses of chemotherapy. I would receive just a little bit of chemo before the transplant: four days of a relatively light regime. 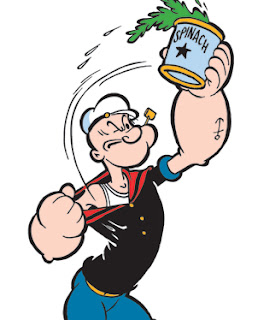 The purpose of this medicine would not be to zap the cancer, but rather to suppress my own immune system – so it would be less likely to reject the donor's cells, once they've been injected into my bloodstream. While my immune system is suppressed, I'd be vulnerable to all kinds of infections - which is why I'd need to stay in the hospital. After my own, rejuvenated immune system bounces back, stoked by those donor cells, it would be my own, newly-produced cells that would go after the cancer. Not unlike Popeye, gobbling down his can of spinach.

In her 2005 book, Living With Lymphoma, Elizabeth Adler describes mini-transplants as "an intriguing new approach... In contrast to the standard stem cell transplant, the conditioning regimen doesn't attempt to obliterate your own marrow. Instead, you are given a milder regimen and repeated infusions of stem cells. That way, the new stem cells can gradually take over the job of producing blood cells from your own marrow.... At this point, reduced-intensity transplants are a promising approach to lymphoma therapy and appear to be well tolerated. It remains to be seen whether they are curative as well" (Johns Hopkins University Press, 2005, pp. 194-195).

That's the good news. The bad news is, the process takes a good bit longer than I'd thought. Previously, I was under the impression that transplant patients need to be in the hospital for about a month. Yes, Dr. Donato tells me, that's true: 3-4 weeks is the amount of time I'd be in. I'd go in a week before the transplant, undergo minor surgery to implant another port (different than the one I've already got), then receive my four days of chemo. After receiving the transplant, I'd stay in the hospital's special unit for 2-3 weeks longer, undergoing frequent blood tests to assess how the anti-rejection medications are working. The surprise, for me, is not the month in the hospital but the amount of down-time afterwards: I should expect to be away from work for a total of 3-4 months, says she. It would take that long for me to build up my strength, afterwards. Brenda adds that most stem-cell transplant patients have to go on disability, for at least part of that time.

So, assuming I decide to go through with this, when would all this happen? No clear answer emerges today. I've got to wait for the Tumor Board's decision, then speak with Dr. Lerner about it. I expect he'll recommend that I stick with watch-and-wait for the next year or so. On the other hand, maybe he'll say, "No time like the present," and suggest we move ahead. 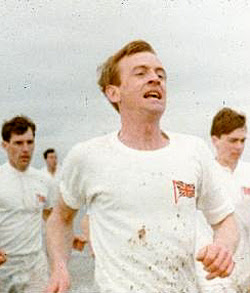 I’m still getting used to the fact that, with indolent lymphoma, everything seems to happen in slow motion. Answers emerge gradually, over time. It reminds me of that slow-motion opening scene from the film, Chariots of Fire, the one in which the British Olympic team is running ever-so-slowly along the beach, training for the big one. I’m in training, too: although precisely when the big event will take place and what form it will take remains a mystery.
Posted by Carl at 11:53 PM

For more information regarding Nursing Information