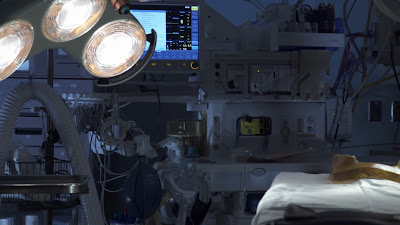 It’s been more than a year since I’ve posted to this blog — which is a good thing. I haven’t had a lot of medical news to report. But now, that situation has changed.

Looking back at my past entries, I see that, on August 9, 2017, my endocrinologist Dr. Stephanie Fish was talking with me about the slowly-growing lymph nodes in my neck. She said at that time that they were big enough to remove surgically, but that I could also wait on the surgery if I preferred.

I chose to wait. She told me I’d probably need surgery within 2-5 years, depending on what happened to the thyroglobulin numbers.

Well, it’s not even two years yet, and the thyroglobulin numbers have climbed at a faster-than-expected rate. In subsequent visits with Dr. Fish and my surgeon, Dr. Jay Boyle, I got the unmistakable impression that — based on those rising numbers, as well as measurements of my lymph nodes taken by ultrasound scan — my doctors were ratcheting up their pro-surgery lobbying efforts.

Part of my hesitation has had to do with non-cancer-related realities of my life. After 27 years serving one congregation, I’m now in the first year of a new pastorate, and loving it (I started on February 1, 2018 as Pastor of the Lamington Presbyterian Church in Bedminster, New Jersey). I’ve been feeling hesitant to break the momentum of this critical first year, and as long as my doctors were at all open to a watchful-waiting approach, I’ve been content to coast along.

Besides, there’s a bit of a risk to this surgery. Although they reassure me that my cancer is slow-moving and my prognosis is good — and that there’s a strong likelihood the surgical solution will be effective — there are structures in the neck that could sustain collateral damage from the surgeon’s scalpel. The principal concern is nerves: especially one that controls the ability to lift the arm higher than the shoulder and another that controls my left vocal cord.

I figure I can live with some decreased mobility of my left arm, should that be the result. The vocal cords are a different matter: I speak for a living. Dr. Boyle tells me some permanent hoarseness of voice is a side-effect in about 25% of cases. (I’m assuming he’s talking about the general average; as a surgeon who narrowly specializes in this type of surgery, his personal average is surely better than that.)

Until about a month ago, I was hoping I could postpone the surgery until early in 2019. Considering the rhythms of parish life, there’s just not a good time for a pastor to take medical leave in the late fall — what with the annual stewardship campaign, and with Advent and Christmas following soon after.

Drs. Fish and Boyle were clearly not pleased with my foot-dragging, so several weeks ago I  reluctantly agreed to have the surgery done tomorrow, November 30, at Memorial Hospital of Memorial Sloan-Kettering Cancer Center in Manhattan — the same place where I had my thyroid removed.

What pushed me over the edge was a consultation with a third MSKCC physician, Dr. Eric Sherman, a chemotherapy specialist, that took place on October 26. (Yes, my doctors triple-teamed me; and it worked.) There’s a possibility, I learned from him, that it may be wise to follow the surgery with either some mild radiation treatments — possibly a repeat of the radioactive-iodine pill I took following my thyroidectomy — or some chemotherapy, or both. Dr. Sherman was reassuring in predicting that the chemo I may receive will be nowhere near as potent as the R-CHOP regimen I underwent in 2006 for my non-Hodgkin lymphoma. He didn’t seem to think that either of those treatments will slow me down much. So, I’ll wait and see what recommendation emerges, after the pathologist has a look-see at my tissue samples, post-surgery.

Dr. Sherman also explained a detail to me that I somehow hadn’t picked up from what my other doctors had told me. There’s a sweet spot for lymph-node removal surgery: the nodes have to be big enough to remove easily, but not so large that they become enmeshed with other structures in the neck: that would make collateral damage harder to avoid. I’m in that sweet spot now. Were I to wait much longer, the possibility of limited arm motion or vocal-cord damage would be greater.

So, here I am, on the eve of surgery: fearful of post-operative pain, and anxious about waking up with a hoarse voice that may be more than the typical result of having been intubated in the operating room. They tell me I’ll be in the hospital for at least three nights following surgery, because I’ll have a drain implanted near the incision for that period of time. I’ve never had one of those before, so I don’t know what to expect.

The problem is, I’ve had a long time to think about this, to weigh the relative risks of watchful waiting vs. surgery. Had it been an emergency, I simply wouldn’t have had time to engage in second-guessing as I have.

Email ThisBlogThis!Share to TwitterShare to FacebookShare to Pinterest
Labels: surgery

Prayers abound. I am sure your new congregation understands that you, like the rest of us, are human. Advent Peace, Craig Barth

Golly, Carl! You're in my prayers. I'll be looking for encouraging news on the other side...

You're in our prayers. I love your voice. May you keep it intact!
Myrlene

My prayers will surround you, as well Carlos. Having some hoarseness that can’t be reversed ( though not severe) I can appreciate the fear of that side effect. I’m going with the “sweet spot” optimism and sending only positive energy your way in the days to come.

God bless you my friend.

Prayers, of course. May you be buoyed by all the prayers coming your way. The "sweet spot" definitely sounds persuasive, and your surgical (and divine) triumvirate are trustworthy, so I'm anticipating a positive surgical outcome.

I sure hope you hear reassuring news from the surgery, and are not in too much pain.

Sending good healing wishes to you, Carl. Here's to excellent surgeons and good timing. All the very best!!