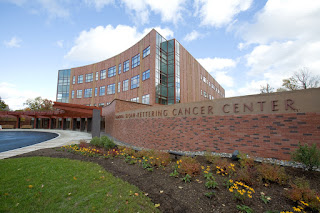 I've just returned from Memorial Sloan-Kettering's satellite facility in Basking Ridge, New Jersey. I had a routine ultrasound followed by a consultation with my surgeon, Dr. Jay Boyle. Routine, yes, but - since I'd had a biopsy of a lymph node on the left side of my neck several months ago that revealed recurrent papillary thyroid cancer - I knew this would be a discussion about treatment options. They're also pretty certain that several small nodules that have been detected in my thyroid bed (where the thyroid used to be) are also cancerous, but those are too inaccessible for a needle biopsy.

I also knew that, because Dr. Boyle saw no need to move my appointment up after news of the biopsy results came in, this is a relatively slow-moving situation.

Bottom line is, we decided to continue watchful waiting for now. I'd told the nurse that was my preference, based on what I knew, and she told Dr. Boyle of my wishes before he came into the room. He's agreeable with that. He said that, as far as he's concerned, we could go either way. He did say that, if we decided on surgery, he'd recommend removing a whole lot of lymph nodes as well as the nodules in the thyroid bed, because it's not easy to keep going back in there and remove a lymph node here, a lymph node there. With each new surgery, there's more potential for damage to the tissues of the neck area. He said that, based on the location of the nodules, surgery would present about a 10% chance of permanent damage to the nerve that controls the vocal cords. I speak for a living, so permanent hoarseness and weakness of voice is not something I'd consider lightly.

I asked him where in the body thyroid cancer usually metastasizes to, and he said the lungs and the bones are the most common. In either of those cases, though, he said it's usually treatable with either further radioactive iodine treatments or beam radiation.

The ultrasound showed no change in the size of the thyroid-bed nodules, nor of the couple of abnormal lymph nodes they've been watching, but it did show a new, very small lymph node in the same area that also looks abnormal. The doctor said he could only barely feel any of those lymph nodes as he palpated my neck.

The other doctor who's involved with this decision is my MSKCC endocrinologist, Dr. Stephanie Fish. Dr. Boyle tried unsuccessfully to get Dr. Fish on the phone to find out why, exactly, she'd ordered the biopsy - because he said that, in his experience, when a doctor orders a lymph node biopsy, it's generally because surgery is a likely outcome (if it turns out there's a malignancy, of course). When I reminded him of my non-Hodgkin lymphoma history, he said that could explain it - there would be a need to determine which of my two kinds of cancer was causing the swelling in the lymph nodes. Different cancer, different treatment protocol. (We now know, of course, it’s the thyroid cancer that’s recurred, not the lymphoma.)

I see Dr. Fish on July 31st. They drew blood today that will provide her with thyroglobulin numbers and other crucial information she needs, prior to that appointment.

It's kind of nerve-wracking to wait all that time, and a little frustrating that the two doctors weren't on the same page prior to my arrival today. Dr. Boyle said he will talk to her, though, and I'm sure he'll call if there's any change.

I'm OK with this outcome. I'd rather not face another surgery at this time, if if can be avoided. With years of watchful waiting for my NHL behind me, I'm comfortable with the "don't shoot till you see the whites of their eyes" approach. Sure, I'll continue to live with uncertainty, but what else is new?

Today's appointment confirms for me how important it is to be go into such meetings well-informed, and to speak up about my own preferences as a patient. Some treatment decisions are less than clear-cut, clinically speaking, which leaves significant room for patient preference to be taken into consideration.

Next appointment with Dr. Boyle is in 6 months. As I've said, I see Dr. Fish in just under 2 months.

Thank you, Carl, for your candor and openness. I am grateful to know this and will engage in watchful (and prayerful) waiting along with you.

Prayers for your continued wholeness. Your gifts are needed. As I have said before your well of knowledge and compassion is deep,

Thanks, Carl! Having a cancer survivor (daughter, Roberta) and another family member whose cancer was treated successfully, but he died anyway (husband, Ward) I really appreciated your words! I agree with Terry, you have many gifts - and they are so valuable!


Thanks, Carl, for your information! Having two family members with histories of cancer, I'm grateful for your willingness to share. I agree with Terry - your gifts are valuable - and much needed!