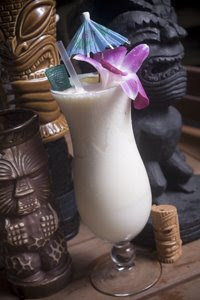 No, I’m not talking about some concoction served in an umbrella glass, under a buzzing neon light. I’m talking about a new combination of anti-cancer drugs that may help certain lymphoma patients.

“Novel Clinical Study For Lymphoma Patients Beginning,” reads the headline of yesterday’s internet news article. It heralds a clinical study, investigating whether patients receiving a new combination of two chemotherapy drugs will do better than those receiving more conventional treatments. The drugs are for patients with diffuse large B-cell or mantle-cell lymphoma. Diffuse large B-cell was the aggressive type of cancer I had, which has (fortunately) not come back since my R-CHOP chemo treatments in the spring of 2006. If it ever comes back, I could potentially benefit from tossing back a few of these new cocktails (well, not literally tossing them back; they’d be delivered through IV tubes).

The drugs being studied are bortezomib, marketed as Velcade, and vorinostat, marketed as Zolinza. (Where DO they come up with these crazy names?) Bortezomib – a comparative old-timer in the world of cancer drugs – has been around since 1995, and vorinostat is a newer drug, approved by the FDA for treatment of another type of lymphoma (cutaneous T-cell) less than two years ago.

These types of clinical trials go on all the time. This one’s a phase II trial, one of the riskier varieties. As I understand it, phase I trials are truly experimental – only the sickest patients get these drugs, the unfortunate souls for whom nothing else is working. Based on experiments with laboratory animals (the proverbial “guinea pigs,” whether or not they actually belong to that species), the scientists are reasonably sure the drug will help humans, but they can’t be absolutely sure. So, they pick a few people who have no other choices, give them the new drug, then sit back and watch what happens.

If the experimental subjects do better than expected, the scientists move on to phase II. They’re still working with a relatively small group of desperately ill patients, but this time they’re trying to figure out the dosage. In this stage, patients sometimes experience severe side effects, as the experts try to get the dosage right. Neither phase I nor phase II trials are a walk in the park for the volunteers who participate in them – although they’re usually willing enough to take the risk, because they have few other alternatives.

If the signs continue to be good, the researchers move on to a stage III trial. By now, they know the drug works, but they need hard data comparing it to other drugs. This is the sort of trial that involves thousands of patients all over the country (or even the world). It includes randomization – there is a randomly-selected control group of patients, who are given some other, more established drug instead of the one being studied. (In cancer trials, placebos are rarely given to the control group, for ethical reasons.)

If the new drug makes it through this third gate, it will probably receive FDA approval. The company then dispatches its eager sales force out to doctors’ offices, with their free pens and sandwich trays for the office staff. After the drug is out there for a little while, stage IV trials follow, as the benefits and side-effects of the treatment protocols are studied further, over time. 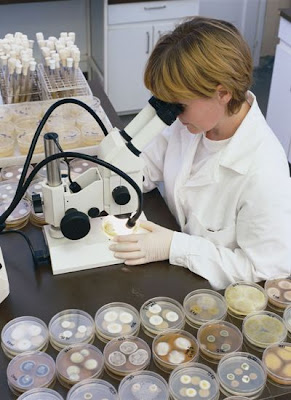 Speaking as a cancer survivor, it’s encouraging to read of new developments like these. I’m glad the pharmaceutical researchers are out there, dripping fluids from eyedroppers into petri dishes, or whatever they do. It’s a long road, from the genesis of an idea in a laboratory to a chemo nurse hanging a bag of the stuff on an IV pole. Drug companies have to put up millions of bucks before they see a penny of profits, and for every drug that makes it into production, many more die on the vine, never making it out of stages I or II.

Will I ever receive this yet-unnamed drug combo? Who’s to say? It just goes to show how dynamic and uncertain the field of cancer treatment continues to be. I’m in a slow, watch-and-wait mode right now. It’s remarkable – and scary – to think that the drug that could help me one day may still be in the early theoretical stages, years away from production.

We live with that uncertainty, and with that hope.
Posted by Carl at 9:22 AM

Thanks for bringing clinical trials to attention. I am able to post this comment because in 1993 I was a "subject" in a Phase I trial of the first monoclonal antibody used in humans to treat cancer: rituximab (the "R" in your 1996 regimen). Without it, I (and my physicians) doubt I'd be here today.

To clarify your discussion of trials: Phase I trials - also called toxicity trials - are devised only to determine what levels of drug are tolerated in humans. They are not intended to test whether or not they work against cancer in people. (Of course, the researchers and patients can't help noticing if the trial subjects' cancers get better or worse.)

Phase II trials look at dose a little further, as well as look at effectiveness against a type of cancer. And Phase III trials are devised to compare the new treatment against standard treatment.

The NCI (National Cancer Institute) has a nice webpage on clinical trials: http://www.cancer.gov/cancertopics/factsheet/Information/clinical-trials

Many dedicated researchers are trying to work with politicians and government workers to find better ways to get drugs from the bench to the bedside.

All I know is that clinical trials are the best way we know to find safer and better treatments. With well-funded and well-done trials that have enough patients enrolled, we will speed up improvements in treatment options.

There are no incurable diseases; only diseases for which scientists are working toward cures.