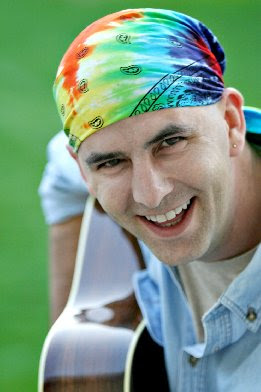 Recently, I’ve been enjoying the music of David M. Bailey, a cancer survivor and singer-songwriter. He comes from a pretty well-known family in Presbyterian circles – he’s the son of biblical scholar and missionary educator Ken Bailey.

At the age of 30, after David started experiencing severe headaches, doctors discovered a massive brain tumor. After surgery to remove the tumor, they gave him six months to live. Twelve years later, he’s got 17 albums to his name and maintains a busy tour schedule.

In the following radio interview, David tells the story of how his cancer diagnosis completely re-oriented his life, leading him to quit his corporate career to take up the guitar he’d laid aside ten years before. At first, it was a crisis of faith, as he raised the “Why me?” question. But then, he had a sense that God was directing him to move on to a different question: “What now?” He started performing and touring – and, in the midst of it, discovered “what God can do with a guitar and a brain tumor.” At first, David admits, people treated him as a curiosity: “boy with brain tumor surviving and singing.” Those first concerts grew into a new, full-time vocation, a significant musical ministry with special appeal for cancer survivors:

Here’s a music video of his, a song called “Tucson.” I take it as a sort of anthem for cancer survivors:

This video is more of a homemade production – sound quality leaves something to be desired – but it’s a good song. It’s called “Live Forever”: