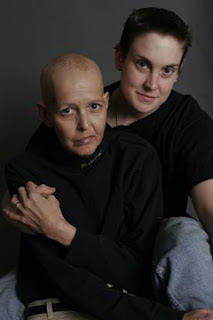 This evening, Claire and I go to see a movie: a short documentary, Freeheld. It’s being shown at Christ Episcopal Church in nearby Toms River, our county seat (and my hometown). Freeheld is the story of the final days of Lieutenant Laurel Hester, an Ocean County Sheriff’s Officer who died of lung cancer.

As a cancer story, the film is compelling enough. Yet, there’s also a civil rights element to her story (which is why the director, Cynthia Wade, made the film). Freeheld is also the story of Laurel Hester’s battle with the Ocean County Freeholders (our county governing board), to get her domestic partner of five years, Stacie Andree, named as the beneficiary of her pension.

The New Jersey Supreme Court – inspired, no doubt, by Laurel’s case – has since ruled that all counties in the state must extend spousal benefits to same-sex domestic partners. The movie tells the tale of several Freeholders meetings, during which the elected officials stonewalled Laurel, Stacie and their supporters, before finally giving in and granting Stacie the pension rights.

About half the movie consists of footage from Freeholders meetings, but the rest of it consists of domestic scenes of Laurel and Stacie coping with the cancer. Much of it is familiar to us. Especially moving, to me, is the scene depicting Stacie cutting off Laurel’s hair with a set of electric clippers (it had already begun to fall out, due to chemotherapy). Then, the two reverse roles, and Laurel cuts off Stacie’s hair: a symbol of solidarity on Stacie’s part. There’s also the glazed, vacant look in Laurel’s eye; I remember when I looked like that, in the midst of my chemo treatments.

After the Freeholders relent and grant the couple’s request, the final scenes of the film depict Laurel’s funeral at St. Mary’s By-the-Sea Episcopal Church, which is located across the street from our church. It’s a typical police officer’s funeral, with uniformed officers marching to the skirl of bagpipes. Laurel had been, among other things, an undercover narcotics officer. She put herself in harm’s way on numerous occasions, then had to endure – for a time – the fear that her partner might lose their house after her death.

Laurel lived right here in Point Pleasant; Stacie still does. John Bartlett, one of the Freeholders, was a student teacher in my high-school classroom in Toms River, before leaving teaching to enter politics. This is, for me, a hometown story.

It also comes close to home, for us, because of the cancer element. My story has turned out better than Laurel’s. I start to write, “There but for the grace of God...” but then change my mind and delete those words. It wouldn't be right to say that, for God’s grace was with Laurel in death, even as it is with me in life. "Neither death, nor life... will be able to separate us from the love of God in Christ Jesus our Lord" (Romans 8:38-39).

See Freeheld, if you get the chance. They say it’s short-listed for an Academy Award nomination for Best Short Documentary.