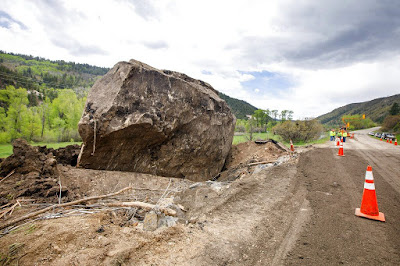 So, did you hear the one about the two massive boulders that dropped from the sky onto a Colorado highway?

Well, not from the sky exactly. They broke off a nearby mountain and went rolling downhill, completely blocking Colorado Highway 145. No one was hurt. But no one could get through on the road, either, until something was done.

These were no ordinary boulders. They were big. Really big. The largest one was big as a house.

The highway department figured they could dispatch the smaller one — the one weighing 2.3 million pounds — with dynamite. Which they did. Kaboom! Then they bulldozed away the rubble.

The larger of the two boulders — the behemoth weighing 8.5 million pounds — was a different matter. It would have cost nearly a quarter-million dollars to pulverize it. So, State authorities decided to take a different approach. The Governor issued an executive order declaring it to be a monument. They christened it “Memorial Rock.” Then they re-routed the highway around it.

There are at least two different approaches to a cancer diagnosis. Oftentimes, you can blow the tumor up with treatments like chemotherapy or radiation. Bing, bang, boom and you’re done with it. Onward and upward!

Other times, the obstacle is just too dang big. You can build a road around the thing eventually, but it’s always going to be there, a part of your life. 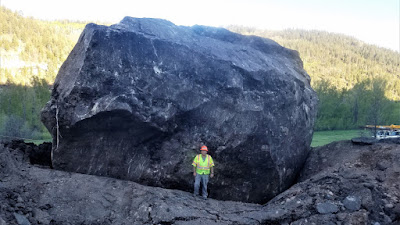 I think it’s creative the way the Colorado Governor declared the mega-boulder to be a memorial. He did it to qualify for some kind of Federal highway funding, but there’s a sort of poetic justice to his proclamation. When something that big drops into the middle of our lives, causing a massive detour, it’s automatically a memorial in and of itself.

So, if you live with cancer, as I do, I suggest you try to make the best of it. Slap a bronze plaque on the thing. Issue a proclamation. Do whatever you have to do to convert your “new normal” into a monument: to something, it matters not what.

Then, the next time you find yourself driving by, give the thing a thumbs-up or a tip of the hat. If nothing else, it’s a memorial to the challenge you rose up to meet, then vanquished.

(Thanks to Sarah Todd, who wrote the story in Quartz that gave me the idea for this.)

Really nice content ... Admin... Have great information I contribute with your experienced... I hope you post again soon. I am very happy to leave a comment for this blog, which really put honest information...
dystonia pain relief

I was diagnosed of Herpes 2years ago and I have tried all possible means to get the cure but all to no avail, until i saw a post in a health forum about a Herbal Doctor(Dr imoloa who prepares herbal medicine to cure all kind of diseases including Herpes, at first i doubted, if it was real but decided to give him a trial, when i contacted Dr imoloa through his Email: drimolaherbalmademedicine@gmail.com he guided me and prepared a herbal medicine and sent it to me via courier Delivery service,when i received the package (herbal medicine) He gave me instructions on how to consume it, i started using it as instructed and i stop getting outbreaks and the sores started vanishing, could you believe i was cured of this deadly virus within two to three weeks and notices changes in my body. Days of using this REMEDY,couldn't believe the healing at first until i see it as my HERPES get cleared like magic Dr imoloa also use his herbal medicine to cure diseases like, HIV/aids, lupus disease, dry cough, fever, malaria, bronchitis disease, cystic fibrosis, Lyme disease, acute myeloid leukaemia, alzheimer's disease, blood poisoning, measles, cervical cancer, kidney cancer, chronic kidney disease, diarrhoea, epilepsy, joint pain, mouth ulcer,bowel cancer, discoid eczema, eye cancer, food poisoning, fibroid, hairy cell leukaemia, mouth cancer, skin cancer disease, lung cancer, rheumatoid lung disease, liver disease, penile cancer, parkinson disease, arthritis, breast cancer, bone cancer hepatitis A.B.C, Diabetes, fatigue, muscle aches, anal cancer, asthma, Contact this great herbal Doctor today the father of herbalism. via Email: drimolaherbalmademedicine@gmail.com or whatssapp him +2347081986098. and get cured permanently He is real..

Most prostate cancers are adenocarcinomas, cancers that arise in glandular cells of the prostate’s epithelial tissue. Prostate cancers usually progress slowly and produce no symptoms in the initial stages. Eventually, the tumor may enlarge like mine use too, the prostate gland, pressing on the urethra and causing painful or frequent urination and blood in the urine. So I was so uncomfortable with this prostate cancer diseases then I decided to do online search on how to cure cancer because I well have read a lot about herbal medicine, I came across a lot of testimony how Dr Itua cure HIV/herpes then Cancer was listed below the comment.with courage I contacted Dr Itua and he sent me his herbal medicine through Courier service then I was asked to pick it up at my post office which i quickly did. I contacted Dr Itua that i have received my herbal medicine so he instructs me on how to drink it for three weeks and that is how Dr Itua Herbal Medicine cure my prostate Cancer, The treatment takes three weeks and I was cured completely. Dr Itua is a god sent and I thank him every day of my life. Contact him now On:Email:drituaherbalcenter@gmail.com/   Whatsapp:+2348149277967.
He listed to that he can as well cure the following diseases below.... Cerebral Amides. Lung Cancer,Brain cancer,Esophageal cancer,Gallbladder cancer,Gestational trophoblastic disease,Head and neck cancer,Hodgkin lymphoma Intestinal cancer,Kidney cancer,Leukemia,Liver cancer,Melanoma,Mesothelioma,Multiple myeloma,Neuroendocrine tumors,Hodgkin lymphoma,Oral cancer,Ovarian cancer,Sinus cancer,Soft tissue sarcoma,Spinal cancer,Stomach cancer,Testicular cancer,Throat cancer,Thyroid Cancer,Uterine cancer,Vaginal cancer,Vulvar cancer. Alzheimer's disease,Autism,measles, tetanus, whooping cough, tuberculosis, polio and diphtheria Adrenocortical carcinoma. Alma, Uterine Cancer, Breast Cancer, Allergic diseases. Kidney cancer, Love Spell, Glaucoma., Cataracts,Macular degeneration,Cardiovascular disease,Lung disease.Enlarged prostate,Osteoporosis.Generalized dermatitis,Alzheimer's disease,Brain Tumor,Lupus,Endomertil Cancer, cerebrovascular diseases
Dementia.Colo rectal cancer, Lottery Spell, Bladder Cancer, Skin Cancer,Ovarian Cancer,Pancreatic Cancer, HIV /Aids,Brain Tumor, Herpes, Non-Hodgkin lymphoma, Inflammatory bowel disease, Copd, Diabetes, Hepatitis

I was diagnose April 17,2015 and find out I'm HIV positive.I was scared because there is no cure for HIV/AIDS but today some people still don't believe that there is cure for HIV, it can only be cured through Africans root and herbs,and our doctor's here in USA few of them know about the African herbal medicine can cure Hiv but they chooses to hide it from us just to make a sales of medical expertise. I did a research online finding way to get rid of my disease,I saw a comment about a herbal doctor on internet Name Dr itua ,who has cured several disease with his powerful herbal medicine, I contacted him on whats-app, chat with him explain my self to him.He said he can cure hiv perfectly well , he gave me his request which i send to him. within 5 days he sent me the herbal medicine through ups courier delivering service And told me how to take the medicine for 2 weeks to get cured,I did for 2 weeks, within this 7 days  i notice a very big change in my health and i new some thing great has happened then i went to confirm my result after finishing the herbal medicine for two weeks it was absolutely negative.The doctor who new i was hiv positive was asking me how come i am negative, what did it took to get cure and were did i get this medicine from and how did i get rid of it I told him every thing about the herbal medicine that cure me. imagine doctor telling me not to let anyone know about it,I wasn't shock though i knew they know about the herbal cure but chose to hide it in other to make sales on medicals expertise,if you are HIV positive Or other disease such as,Sickle Cell,Cancer,Hiv,Herpes,Shingles, Hepatitis B,Liver Inflammatory,Diabetes,Fibroid,Parkinson's,Alzheimer’s disease,Bechet’s disease,Crohn’s disease,Cushing’s disease,Heart failure,Multiple Sclerosis ,Epilepsy Dupuytren's disease,Desmoplastic small-round-cell tumor Diabetes ,Coeliac disease, Ataxia,Arthritis,Amyotrophic Lateral Scoliosis,Syndrome Fibrodysplasia Ossificans ProgresS sclerosis,Seizures,Adrenocortical carcinoma.Asthma,Allergic diseases,,Copd,Glaucoma., Cataracts,Macular degeneration,Cardiovascular disease,Lung disease.Enlarged prostate,Osteoporosis.Autism,Fibromyalgia,Fluoroquinolone Toxicity,Dementia.,Lyme Disease,,Non Hodgkin Lymphoma,Skin Cancer,Uterine Cancer,Prostate Cancer Dercum,Lupus,Hpv,Weak Erection,Infertility,fibromyalgia,Chronic Diarrhea,Get Your Ex Back,Als,SYPHILIS,Colo-Rectal Cancer,Blood Cancer,Breast CANCER,Lung Cancer,Prostate Cancer,Autism,Brain Cancer,Genetic disease,Epilepsy, Parkinson's disease,.. please contact my savior drituaherbalcenter@gmail.com or WHATSAPP number +2348149277967..