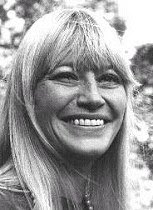 Sad news today, about the death of Mary Travers (of Peter, Paul and Mary fame). A blood cancer was the culprit – in this case, leukemia, with which Mary had been living for some years now.

From an MSNBC.com news article:

“Travers had undergone a successful bone marrow transplant to treat her leukemia and was able to return to performing after that.

‘It was like a miracle,’ Travers told The Associated Press in 2006. ‘I’m just feeling fabulous. What's incredible is someone has given your life back. I’m out in the garden today. This time last year I was looking out a window at a hospital.’ She also said she told the marrow donor ‘how incredibly grateful I was.’

But by mid-2009, [Peter] Yarrow told WTOP radio in Washington that her condition had worsened again and he thought she would no longer be able to perform.”

The last time I saw the trio in concert was a couple years ago, at the Great Auditorium in Ocean Grove, here in New Jersey. I suppose it was not long after her transplant. Mary leaned heavily on a cane, but as she opened her mouth to sing, she was a force of nature.

She’s leaving. Not on a jet plane (would that it were so), but on a far longer journey.

Leaving on a jet plane
by Lancer_MX
Posted by Carl at 10:13 PM

"Leavin' on a Jet Plane" was one of two songs I used as lullabies for my girls.

I think my affinity for it came about because I had to leave my fiance for a week before the wedding (going from school in Colo to NM to tie up details - and then to return to Colo for the wedding) and had a premonition I'd never see him again. I misread the premonition - I never saw my apartment in Colo again. We had to move the wedding to Roswell NM when my mom was hospitalized for a bleeding ulcer.

I saw PP&M twice at Ocean Grove - she was such a trooper, despite leukemia. And they were such a voice for peace and justice. End of an era - a disturbance in the force. Very sad. very very sad.

Well said, Carl. She will be missed for sure.

Wow, thanks for sharing.